The Mishkan’s Pegs and the Details in Chinuch

I heard a shiur this week from Rabbi Levi Garelik in which he mentioned a fascinating story brought down in the Sefer Migdal Oz, a Sefer written in memory of the famed Chosid Azriel Zelig Slonim of Yerushalyim, originally from Lubavitch. In the Sefer is a strange Ma’aseh in which the Frierdike Rebbe seemed to disobey his father, the Rebbe Rashab. Apparently there was a certain Bochur who was trying to get accepted into Tomchei Tmimim, of which the Menahel, the Frierdike Rebbe, refused to accept him. This Bochur, in his eyes, did not posses the right qualities appropriate for a Tomim. In the Sefer is a copy of a letter that the Rebbe Rashab asks his son to nevertheless accept this boy after encountering the crying bochur who said his only desire was to remain Frum and be a Tomim. At the end of the letter, The Rebbe Rashab writes that this letter should be burned.

Needless to say, from the fact that we have this letter and know about this, the Firierdike Rebbe did not do as his father told him to do.

Not only did he not burn the letter, but at the bottom of the letter the Frierdike Rebbe writes the background of the story and why this boy was finally accepted.  Rabbi Garelik was saying that we can a see from this how much the Frierdike Rebbe cherished this letter.  In order to explain why, he prefaces with an explanation from the Rebbe on a detail of the building of the Mishkan.  The Rebbe asks why theTorah required the חכמי לב – those Jews who were “Wise of Heart” – to be the ones to do every detail of the construction, even those parts that seemingly do not require great skill.  Specifically, the question is mentioned in regards to the fastening of the fabric covers on the Mishkan.  The way they were kept in place, despite the desert winds, was that they were tied down at the ends and with pegs, hammered into earth, fastened tight.

If you’ve ever seen workers at a railroad, those laborers who wield the jack hammer and bang the stakes into the ground are not the same as the engineers who designed the railroad.  To do the manual labor certainly requires devotion on the part of the laborers, and many of them are truly proud of their heard and dedicated work, but for the most part, they are not chosen for this skill because of their intellectual wisdom.

Why was it crucial that in the Mishkan this be done by the very same “engineers” who did the intricate work of designing the structure and all its parts?

From Rashi’s explanation, the Rebbe proves that even the pegs are integral part because if not they would sway and be posul. Similar to the concept that every Yid who owns a letter in the Torah, is considered to have completed the entire Torah, since without that letter the entire Torah would be invalid.
As such, since it was wise people whom Hashem ordered to make the curtains, that means that they need to do it so it will be complete. Including the pegs.
Ok, makes sense, but in the bigger picture, we could still ask why they had to do every detail?  In other words, even if they did all but the final touches, it would still be the wise people who basically did the work.  Why even the very last details?
The answer to this comes from the fact that in Torah, the one who completes the job is considered to have done the entire job.  This is evident in a number of places, such as the burial of Yosef Hatzadik.  Even though it was Moshe who toiled to arrange it himself, since he did not enter into the Land and do the final burial, it was the Bnei Yisroel who were credited with the entire task.
The Rebbe says this is a powerful lesson to all ‘wise people’ involved in Chinuch. Our obligation does not finish with the teaching of material. Rather we need to be truly wise according to Torah.  According to the Torah only when we follow through with the small details are we considered to have done our job.  We must relate to the Talmid in his totality.  We must deal with the child not only academically, but emotionally, psychology, and in regards to his physical and social wellbeing as well.  When approaching Chinuch in such a manner, then we can be assured that our Talmidim will be firmly planted just as those curtains of the Mishkan, that even the strongest of winds will not move them form the education and values that Torah imbues them with.
This is the approach at Lev Tmimim.  The Hanhola and teachers make a point each day of thinking about this before entering the class.  We have seen with our own eyes the success that each Talmid can reach when following this approach of the Rebbe.
I remember a story, although not who it was about – a certain Shliach perhaps, or a Rov – who was having Chinuch challenges with his teenage son.  He asked the Rebbe if this was a sign that he was failing as a father since, after all, “an apple doesn’t fall far from the tree”.  Perhaps this is a sign that he, the father, is deficient.  And the Rebbe replied that this is true only under normal conditions.  But when the winds are blowing very strongly, sometimes even though the tree is strong, the apple may, in fact, fall far from the tree. 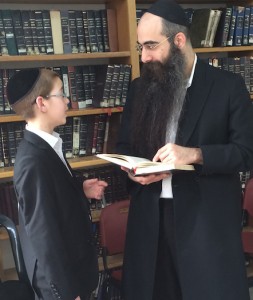 I’ve used this story a number of times to help encourage parents who were struggling with their children’s issues to remind them that they must not necessarily blame themselves for all the problems that their children are going through nowadays.  But now, in light of the above, I think there is a more powerful lesson to be taken.  When the winds are blowing hard, we must work even harder to connect with our children and Talmidim on a deeper level and focus on the seemingly, non academic details, as well, to help make sure that they are firmly rooted in the ground and will not sway in the wind.  In such a manner, we will be able to proudly declare to the Rebbe ראו גידולים שגידלתי.
And now we can understand, perhaps why the Frierdike Rebbe refused to destroy that letter   Tomchei Tmimim was established in order to create the soldiers who will finish the job of Golus and bring the Geulah.  In such a vision, there is no room for a “kid on the margins”. And the Rebbe Rahsab was telling his son that without this marginal boy there will not be that completion.
To me, I see Yeshiva life as a microcosm of the world and the job of finishing the Golus. One spark at a time, one Yid at a time, and one Bochur at a time, we will turn the darkness into light and light up the Neshama of every Talmid in Yeshiva and empower him to go out and function as a Tomim, as the Rebbe’s soldier to bring the Geulah in actuality.